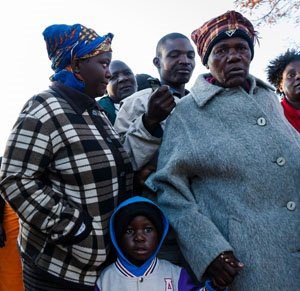 The article below produced and published by news24 and Associated Press is with respect to the last election in Zimbabwe 2018.  Where clear rigging was observed by election observers.  If such electoral rigging was witness in front of observers, then the Zimbabwe diaspora, through MR2V, is right in adopting the position, that the Zimbabwean diaspora election must be facilitated by a completely independent organization, i.e. MR2V.  If we serious about resolving the Zimbabwean crisis, it has to be this way.  The Zimbabwean government and / or Zimbabwean Election Commission cannot be allowed to facilitate the Zimbabwean diaspora election process.  For what is the use of putting the poacher in charge of the chicken yard?

Since 2018 when the article below was written, democracy and The Rule of Law, having been most profoundly compromised in the extreme.  Nullifying any realistic possibility that the Zimbabwean government and / or, the Zimbabwean Election Commission can assume responsibility for the Zimbabwean diaspora vote.

One may take the view that these are harsh words, however they are the truth.  For functioning democracies do not spend a great deal of their time looking for re-engagements with governments all around the world.  That state of affairs describes a government that has been thrown out and rejected by the international community at large, i.e. it has become a pariah state.

Trust must be earned and cannot be demanded or used as a bargaining chip during negotiations.  The nation of Zimbabwe gave this current Administration their trust in 2017, after the coup d’état.  All this government had to do was the right thing and resurrect democracy.  Alas, they went the other way and corrupted the democratic process, to depths never seen before in our country.  A nations trust, freely given, yet trodden underfoot, by the current Administration.

Hence trust has to be earned.

That is way the Zimbabwean diaspora vote can only be facilitated by an independent organization, in the main MR2V.

The legalities of enabling this process to occur are minor and can be accomplished within one week.

For four decades the international arena has given the current Administration the benefit of the doubt, on many dubious occasions in a bid to try and resolve the Zimbabwean crisis. It has not worked and the people of Zimbabwe have been disadvantaged.  For there is a sharp distinction between the people of Zimbabwe and the government of Zimbabwe.