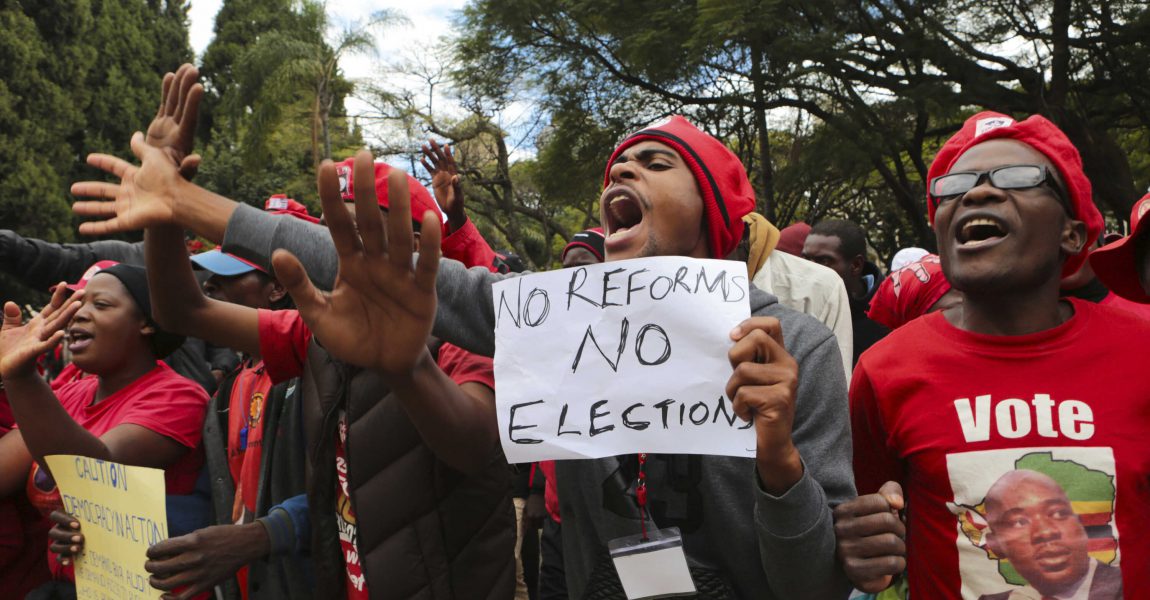 The article below was produced and published by VOA | June 05, 2018 | Written by Anita Powell. The original article can be found here: https://www.voanews.com/

JOHANNESBURG – Zimbabwe’s large diaspora community, much of it in neighbouring South Africa, has lobbied for years for the right to vote remotely in the nation’s contentious elections. That’s no different this time around, as the country faces its first election without longtime leader Robert Mugabe on the ballot.

On Tuesday, thousands of opposition supporters marched in Zimbabwe’s capital, Harare, demanding free, fair and credible elections. The opposition has also lobbied for suffrage for citizens outside the country.

But the constitutional court last week struck down their petition to allow such Zimbabweans to vote.

Proponents argue that if Zimbabweans living abroad could vote, their voice would ring loud and clear in this upcoming election.

While there is no official figure on how big the diaspora is, a court petition last week put the figure at 5 million.

Sox Chikohwero is one such Zimbabwean. An opposition supporter, he fled into exile in South Africa more than 15 years ago, after he says he was arrested for his loyalties and tortured by police.

“I feel disappointed, I feel stressed,” he told VOA. “But what can I do?”

‘It’s not a question of fairness’

Constitutional law expert Lovemore Madhuku, a professor at the University of Zimbabwe, says the law is the sticking point when it comes to voting processes. In 2013, he says, the nation voted for a new constitution that didn’t provide for a diaspora vote. He said the court ruling was in line with existing law.

“It’s not a question of fairness,” he said. “I think the question you must ask is, ‘Is that what the law says?’ Fairness goes to those that put that in the constitution. Remember that this constitution went through a referendum in March 2013, and so many Zimbabweans, 93 percent, voting at the insistence of both ZANU-PF, which was the power, and the MDC, which was in the inclusive government. They campaigned for that constitution to be endorsed.”

Amending the constitution, he says, would require a 90-day notice period. But since the constitution also stipulates that the election must happen before late August, there is no way to make the changes in time.

South-Africa based political analyst Shadrack Gutto says he thinks it’s a misconception that all Zimbabweans abroad support the opposition. Adding the untold millions of overseas Zimbabweans to the voter roll, however, would be expensive and complicated, he said.

But, he says, they’ve earned it by propping up the nation’s ruined economy from abroad.

“They, as citizens, are entitled to vote, and therefore the diaspora vote is very important,” he said. “But most importantly, the economy of Zimbabwe would not have stood the test of time without diaspora repatriation of resources to their families in the country.”

Independent observers have previously criticized Mugabe-era elections for their irregularities; his critics outright accused him of intimidating voters and rigging polls.

Mugabe, who took office in at independence in 1980, resigned in November under pressure from the army and his deputy, Emmerson Mnangagwa.

The 75-year-old Mnangagwa, nicknamed “the Crocodile” for his political cunning, is now standing as the presidential candidate of the ruling ZANU-PF party. He faces 40-year-old Nelson Chamisa, who took over the struggling opposition party after the February death of its leader, Morgan Tsvangirai.

More than 5 million people have registered to participate in the July 30 poll — the first election since 1980 without Mugabe in a central role.