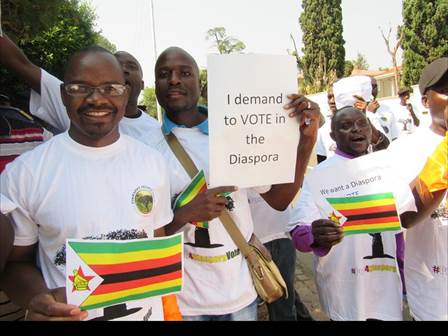 No Voting Rights For The Diaspora, Court Rules

The article below was produced and published by: The Charleston Chronicle | March 22, 2018. The original article can be found here: https://www.charlestonchronicle.net

Zimbabweans in the diaspora with money to invest are holding on to their wallets. An invitation to rebuild the country rings hollow without the right to vote, they say.

This week, the Constitutional Court reviewed the case of three Zimbabweans living abroad and seeking voting rights. The court declined to rule on the case.

“The State must amend its position,” said Thabani Mpofu, representing the Zimbabweans who have lived outside the country for over 12 months.

In a meeting with the Zimbabwean community in Namibia, President Emmerson Mnangagwa explained that the country had insufficient funds to allow voting to take place outside its borders.

“We do not have the logistics now or the capacity,” Mnangagwa told the audience during a question and answer session.

He said Zimbabweans in the diaspora had not been denied their right to vote as those who were “serious” could come back home to register under the on-going voter registration and vote when the time came.

The issue takes on special urgency as Zimbabwe’s first presidential and parliamentary elections will be held in July, Mnangagwa announced.

“As a nation, party and government, we are looking forward to very peaceful, transparent and harmonized elections,” Mnangagwa told reporters after a meeting with South Africans President Cyril Ramaphosa.

Meanwhile, more than a thousand companies and individuals who illegally transferred funds abroad have so far failed to respond to an amnesty offered to encourage the return of cash to the country.

According to the list of companies and individuals with accounts abroad, about $591 million has been returned so far but $826 million has not.

A three month moratorium on fines owed for the transferred cash was extended by two weeks. Those who didn’t bring back transferred monies would face legal action, the President said.

Most of the missing funds were externalized to China with retail and mining companies dominating the list.

Among those who failed to repatriate export proceeds were African Associated Mines Ltd., Marange Resources and Canadile Mining Ltd, and Jinan, which spirited more than $300 million out of the country.

There was no mention of major politicians but a gospel musician-cum-politician, Elias Musakwa, was cited for shipping out US$900 million to Portugal.