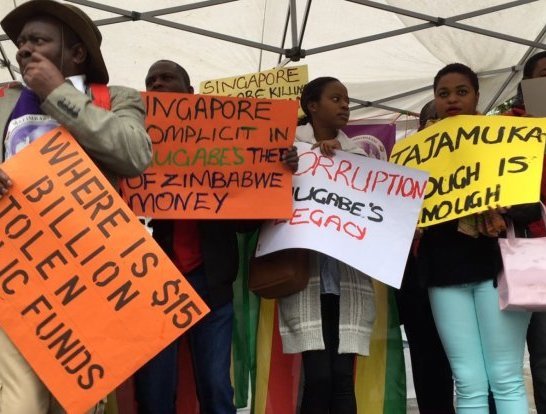 The article below was produced and published by ibTimes written by  By Elsa Buchanan, updated on November 5 2016  09;00GMT .  The Zimbabwe diaspora speaks about Zimbabwe under Robert Mugabe.  Robert Mugabe was removed through a coupe and has since passed away.

Emmerson Dambudzo  Mnangagwa took over on  24th November 2017.  The reasons for the coupe were said to be the erosion of democracy.  To date in 2021, democracy under Emmerson Dambudzo Mnangagwa, democracy in Zimbabwe has been corrupted and compromised a hundred fold, since the period of Robert Mugabe.

It is the worst kind of accolade, for one to be told they are worse than Robert Gabriel Mugabe. However that is what has happened in Zimbabwe.  The country has gone over the cliff edge and is now in its deepest crisis ever.  Human Rights have been chucked out the window.  The Rule Of law is no more.  It is very interesting to read the article below by ibTimes, with the understanding that things are now a hundred times worse.

Zimbabweans based in the United Kingdom have organised a protest in solidarity with campaigns at home to denounce President Robert Mugabe’s perceived mishandling of the economy and alleged crackdown by the state security forces.

After almost four decades of quelled frustrations under Mugabe‘s iron-fisted rule, a flurry of citizen or civil activism movements have been rising and spreading in the South African nation, and are calling for much-yearned for social, political and economic change.

Dozens of members of the Zimbabwean diaspora braved the driving rain on 4 November as they gathered outside their embassy, known as Zimbabwe House, in Central London. Draped in their national flag, or carrying banners, the group urged for Mugabe to step down.

Mary Ndoro, who organised the event, said protesters were “tired of Mugabe and his government. If Mugabe goes, we know that Zimbabwe will come up in a good way and succeed.”

Prominent political activist and politician, Sten Zvorwadza, who was in London for the event, welcomed the initiative: “The citizens of Zimbabwe have made a decision to work across political divide and these initiatives will definitely see the Mugabe regime going.”

Protester Simbarashe Mutero, a 32-year-old from Harare, said he was “sick and tired of the sabotage, corruption, violence, intimidation perpetrated by the government or Robert Mugabe”, and asked for the UK government to support Zimbabweans in their endeavours.

Sandra Vhurande, who carried a banner in the name of campaign movement #Tajamuka, added: “We are crying out to the world, please save Zimbabwe. We are not in good hands because of our government.”

‘Zimbabwe has survived over the years on impunity’

A protester, Nomusa Dube, 34, explained she was taking part in the demonstration to support fellow citizens in Zimbabwe who, she said, can not freely demonstrate, or have been targeted because they are seen as opposing the government.

“If you try and do something like this [a protest in the street] in Zimbabwe, the government sees you as a threat, so you are opposing the current regime […] and you can’t do that in Zimbabwe because they lock you up or the police beat you up, or they abduct you, thinking you are just there to cause chaos. If people were allowed to have peaceful protests everywhere, that would be good.” The event organiser, Ndoro, added: “We’ve got brothers and sisters, mothers and fathers who are disappeared. We have Itai Dzamara [human rights activist] who has disappeared for 17 months and we don’t know where he is.”

As Zimbabwe’s economic problems have led to heightened social instability, the National Vendors Union of Zimbabwe (NAVUZ) is increasingly becoming the target of violence, and Zvorwadza, the union’s chairman, has himself regularly been arrested and beaten by the national police he described as a “paramilitary force”. He explained: “Zimbabwe has survived over the years on impunity”.

Having travelled from Geneva, Switzerland, where he appealed to the United Nations (UN) human rights peer review earlier this week for the disbarring of the Zimbabwean police force from international peacekeeping missions, Zvorwadza said: “[the police force] has failed to work accordingly to the proscribed international laws.”

“The UN should play their part. Not matter how small our problems seem or look, we need those problems addressed because we are suffering under a dictatorship – and [we] need combined forces, both national and international to fight it and disband it.”

Protesting against mishandling of the economy

Other grievances made by the protesters included the government’s handling of the economy, including what Ndoro described as the failure to deliver the 2013 election promise to create 2,2 million jobs and and the introduction of a new currency – dubbed ‘bond notes’.

Echoeing fears the new currency could throw back the nation to the horrors of its 2008 crisis, when the nation’s former banknotes became worthless, Zimbabweans lost all their savings and poverty skyrocketed, Ndoro said: “This money is going to circulate only in Zimbabwe, this money is valueless. You cannot go and use it abroad […] They are bribing people to make them believe this money is going to work but […] it won’t because people need to travel, they need to do trading.” Dube urged the Zimbabwean Ambassador to the UK to raise awareness about police brutality and alleged extra-judicial assassinations, and work with the British government and the international community to help organise free and fair elections in 2018.

Zimbabwe Electoral Commission (ZEC) claimed in October it can not allow Zimbabweans from outside the country to vote in the 2018 elections, because of a lack of resources.

“My hope is for fair elections, and not have rigged elections. Because he [Mugabe] loses an election does not mean it is a passport for somebody to go ravaging and harassing people. If someone loses, they should lose with dignity. [Mugabe] will be 94. We need new blood, somebody with new ideas, we need change.”

Pulling on the national flag hung on her shoulders – a gesture which has become a symbol of the people’s struggles and defiance after #ThisFlag campaign emerged earlier this summer – Dube explained: “Growing up, the flag represented really good things, but now you don’t see those things any more. All I see is just blood.

“This is not what it stands for: it stands for peace, vegetation, but there is nothing like that anymore in Zimbabwe. It’s mostly bare land and people are suffering.”

In Zimbabwe, citizens can face charges of undermining the authority of, or insulting Mugabe under Section 33 (b) of Zimbabwe’s Criminal Law (Codification and Reform) Act Chapter 9:23, which came into law in 2002.